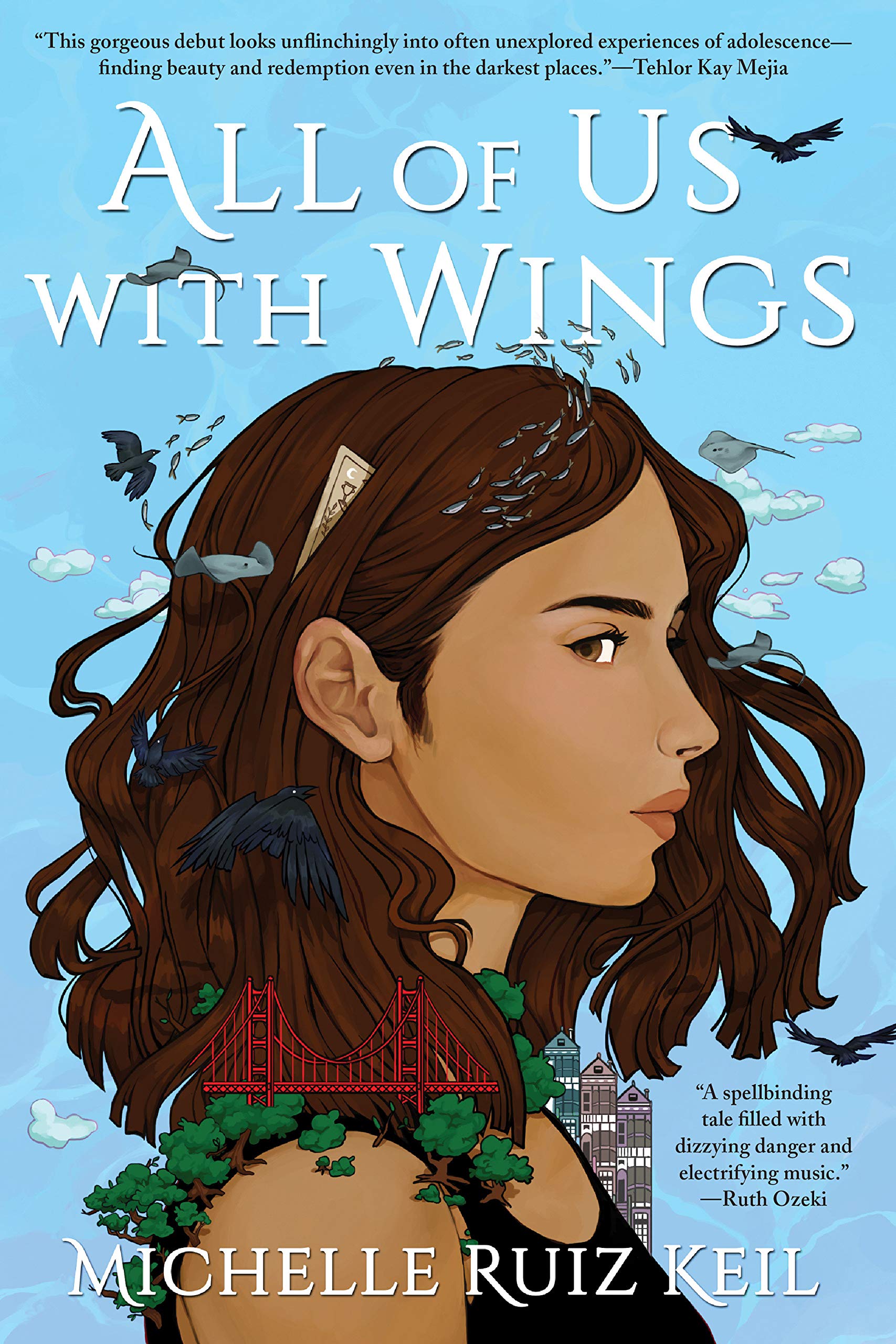 This is a controversial one and honestly, I still fight in my head about the balance of content and realizing that characters are reflections of people that make their own experiences. It’s a tough one, which is kind of nice. It’s incredible to be a reader, and having books that pop up in my head every once in a while because of strong emotions or deep thoughts. It means it really made an impact.

This book is a multiple-perspective book about Xochi, who has kind of stumbled into a role as a governess for Pallas, a 12-year-old living in San Francisco. Her parents, who live with several other friends and bandmembers, are cool and flashy and fashionable, and both live without many boundaries for themselves or expectations for others. Xochi and Pallas, alone one night while a party is raging downstairs, play act a dark magic ritual, and accidentally release dark beings that retaliate on and reveal Xochi’s past and backstory.

Things I liked about this book:

The reason I picked this book up and the biggest parts that I enjoyed were the ones focused on the dark magic being released on the people in Xochi’s past. There is a “fae” feel to the mysterious being who are summoned and I love the tie between the magic and Xochi’s current emotions, not just her backstory and vengeance. This made these parts of the book more complex and interesting.

It is also just neat to read a book about people who live a different lifestyle than me. I love reading content that I can connect to while understanding that I would never make those choices, and it was interesting to hear how Pallas’s parents live together even though they aren’t in love, along with their free-love philosophy about their lives. Definitely not for me, but I have never empathized or thought about it before, so it opened up my perspectives a little bit and I thoroughly respect that.

Pallas was absolutely hands down my favorite character in this book. Though she has grown up in a house knowing the lifestyles that surround her, she is finally starting to realize how much she feels like a little girl, and the things that happen in this book really force her to start making decisions for herself and grow up in ways that she can be proud of and stand on her own. The people who live in her house, including her parents, either baby her, or treat her like one of them, and it is so important for her to realize that this means she is on her own and has to make her own decisions and make her own path in life.

Things I struggled with in this book:

The content. First of all, you can see I labeled this book “Gritty YA.” This book came in my YA Book of the Month box, but the amount of content surprised me from page one. It came in fast and hot, including drug use and hard partying in the very first scene.

The writing. It just wasn’t organized. The perspective changes were always surprising to me, and the content flipped from one subject to another without much thought or consideration of how they fit together or how timing worked out. This made me not connect with a lot of the characters or perspectives and pulled me out of the reading experience pretty often.

Xochi. She just makes bad choices. The things she thinks about doing are actually good choices, and then she goes and does the exact opposite. She is especially destructive for Pallas, who she is technically supposed to be taking care of. AND is also in love with an almost 30-year-old, when she herself is a high schooler. Now, as a 17-year-old who is on her own, running away from her past, she does seem more mature and more like an adult than some of the housemates in the house she lives in, but that doesn’t justify her behavior or choices. It would have been so easy to make her 18 and then this wouldn’t be an issue at all. If this was a specific thing the author wanted to comment on, there wasn’t enough of it for me to discern what the book was supposed to be talking about or advocating for. In the end, I didn’t understand this decision and found it definitely offputting. Her love interest (the almost 30-year-old remember) also has a rule about underage girls, but he doesn’t seem to have enough self-control to follow through and he really should have grown a pair and just said no.

Anyway, in the end, I was so glad Xochi wasn’t our main character, and that the other perspectives made up for the frustrating choices and storyline.

Final thoughts: loved the mysterious magic mixed with the atmospheric setting, but the reading experience and content made this not my perfect cup of tea.